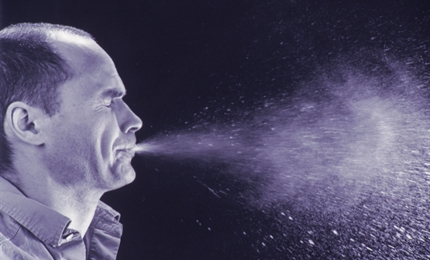 BBC article: The real reason germs spread in the winter

A recent study carried out by the US National Institute for Occupational Safety & Health (NIOSH) has shown that the airborne transmission of the influenza virus is significantly reduced by maintaining an atmosphere of 40% relative humidity (RH) and above.

To test the effects of humidity on airborne influenza, aerosols of flu virus were “coughed” into a room’s atmosphere by a mechanical manikin at humidity ranging from 7-73%RH, while the air intake from a breathing manikin in the room was monitored.

The air inhaled by the breathing manikin showed that at ≤23% RH the airborne flu virus retained 71-77% infectivity, while at ≥43% RH infectivity dropped to just 15-22%. The study showed that inactivation of the virus at the higher humidity occurred rapidly after coughing with most of the decline occurring in the first 15 minutes.

The study concluded that maintaining relative indoor humidity at 40% RH and above will significantly reduce the infectivity of an aerosolized influenza virus.

It is estimated that over 7.6 million working days are lost in the UK each year as a result of flu-related sickness, costing the UK economy over £1.35 billion per annum. Most experts think that flu is spread by tiny droplets created when people with flu cough or sneeze, which can remain in the air for hours.

“This study shows how important it is to maintain an optimum humidity in the workplace to reduce absenteeism and especially in areas of high risk to airborne viruses, such as hospitals and doctors’ surgeries.” comments Tim Scott, Sales Director at Condair plc. in United Kingdom.

“Although many professional bodies, including BSRIA, CIBSE and HSE, all recommend maintaining indoor humidity at above 40% RH it is not uncommon to see humidification systems being turned off to reduce operating costs. A low humidity is not as noticeable by employees as a low temperature, so it can go unnoticed. However, the true cost of not maintaining indoor humidity can be poor staff health and an increase in absenteeism, which can far outweigh the cost of operating the building’s humidification system.” Tim concludes.

The National Institute for Occupational Safety and Health (NIOSH) is the U.S. federal agency responsible for conducting research and making recommendations for the prevention of work-related injury and illness. NIOSH is part of the Centers for Disease Control and Prevention (CDC) within the U.S. Department of Health and Human Services.